What is the Three Drive (Three Drives) harmonic pattern?

The 3-drive chart pattern is a reversal pattern that is made up of two corrections and three legs, called drives. Traders often refer to it as an ancestor of the Elliott wave pattern, which makes use of a complex series of drives or waves to predict long-term price actions.

The three drives pattern is self-sufficient, having different entry and exit points. It is a reversal pattern that is made up of three swings of the same length in the same direction. They correspond to particular Fibonacci ratios to identify potential reversal zones. The pattern can be both bearish and bullish and once discovered, it can be a precursor to strong market turns.

The three drives pattern is a reversal pattern that is made up of various higher highs or lower lows. They complete at a 127 or 161.8 percent Fibonacci extension. It can indicate that the market is exhausted in its recent move and a reversal will probably occur on the price chart. The bullish version of the pattern can help to determine possible buy opportunities and the bearish version can help to determine possible opportunities to sell.

The three drives pattern was first stated by Robert Prechter. It is not often used in trading because it is difficult to discover and less common than other forms of harmonic patterns. It is made up of symmetrical price movements with similar Fibonacci projections in a 5-wave structure. 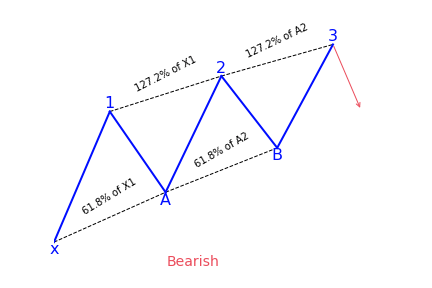 From here, the price correct higher once more. It goes back up into the 61.8 percent retracement of the second drive to give us our B point.

Then there will be one final push lower with price trading down to the 1.27 percent extension of the second drive to give a third drive that completes the pattern and offers a buying zone. 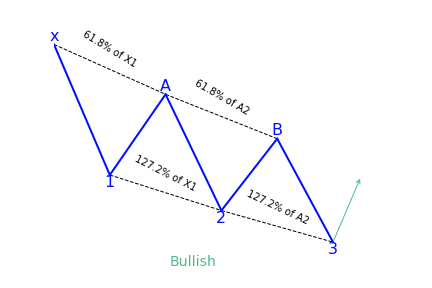 How to identify the Three Drives pattern?

The three drives harmonic pattern is identified by various three higher highs or lower lows. They gather in a reversal of the existing trend. Every move lower or higher is quantified by using the Fibonacci extension and retracement levels of 61.8 and 127.2 percent.
The below rules can help traders identify the pattern:

In some instances, the definition of the 3-drive pattern may be expanded to include various Fibonacci retracement or extension levels, like a 161.8 percent extension rather than a 127.2 percent extension. The pattern also works without Fibonacci levels, but it may be less accurate.

Traders also need to look at the volume behind every drive higher or lower. If the volume during drives is higher than during corrections, traders can have more confidence in an eventual trend change and capitulation after the last drive. Psychologically, the three drives pattern indicates three last attempts at driving the price lower or higher before capitulation happens and the trend reverses.

What does the Three Drives harmonic pattern tell traders?

The pattern is defined by three unique, consecutive and symmetrical drives to a top or bottom. Symmetry in both time and price is vital. It is critical to not force the pattern on the chart. If you don’t notice it, it is best not to trade it.

A reversal will probably happen when the third drive completes. Conservative traders observe for more confirmation that price is reversing. Traders can set their targets at their discretion, but normally goes beyond the last retracement.

If the pattern doesn’t show up, this could point to a strong continuation in the previously dominant movement. The three drives pattern can either be bearish or bullish.

How to trade when you see the pattern?

To trade the 3-drive pattern effectively, traders look to taking a position in the market on the third drive. This provides the most accurate price levels of where to enter the trade. It also gives the best potential to have a profitable trade.

The third drive mostly advances to a Fibonacci extension of 127.2 percent of the drive C. Some traders prefer to place their take-profit levels to the 161.8 percent of drive C. This is mainly a matter of personal preference and traders can set the levels to their choice as long as it provides a good risk to reward ratios set up.

Traders can apply the pattern in various ways, such as:

It announces a potential reversal

The three drive chart pattern is a reversal pattern that comes out of the current trend. Therefore, it makes it possible for traders to profit from the trend change. The pattern can also indicate traders who are positioned in the trend to exist once the pattern comes up.