What is the Cypher harmonic pattern?

This is one of the few patterns not identified by Scott Carney. It was discovered by Darren Oglesbee, and though it is technically an advanced pattern formation, it is often linked with and traded together with harmonic patterns. It has particular Fibonacci measurements for every point within its structure.

What is the Cypher pattern?

The cypher pattern is an advanced harmonic pattern that, when traded correctly, can have a truly outstanding strike-rate as well as a pretty good average reward-to-risk ratio.

The cypher is a five-point pattern, composed of points XABCD. It is easy to spot on a chart due to its characteristic wave-like look, displaying either rising peaks or falling valleys. Traders can trade it like other harmonic patterns, by waiting for a reversal at the end and then using pending orders to profit from any potential breakout.

This pattern looks like the butterfly in both its construction and where it will occur (close to the end of trends). However, the cypher pattern is rare and not one that shows up frequently. But don’t confuse rarity with being more powerful or profitable.

It is known to have a high positive expectancy, no different than a bat or alternative bat. Just like all other harmonic patterns, the Cypher has specific rules and conditions that must be met for it to be a particular cypher pattern.

How to identify the Cypher pattern?

The pattern must verify a few conditions to confirm:

Cypher has less rules to follow compared to other harmonic patterns. Although its successful rate has nothing special compared to Gartley or Bat, the frequency of showing up and the ease of rules make this pattern become the favorite for all beginner traders. This pattern works best when the market is calm. In a strong trending market, especially after the news, the cypher pattern becomes less reliable. The bigger the pattern (the longer it takes to form the pattern), the stronger the support/resistance it gives.

The B rule & What does the Cypher pattern tell traders?

Even though not many people apply it, it is an important rule. The rule basically states that B cannot touch the 78.6 percent retracement of X to C, including the candlestick wicks. 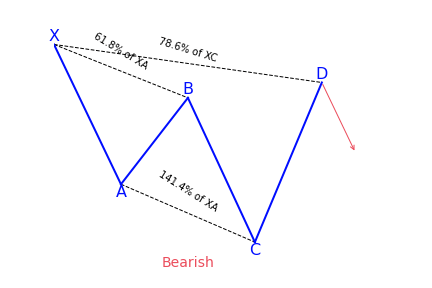 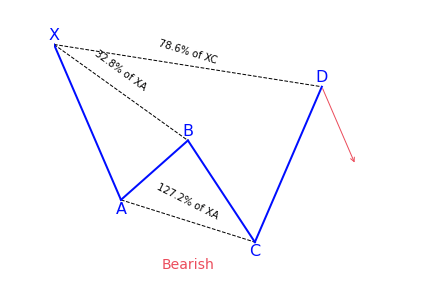 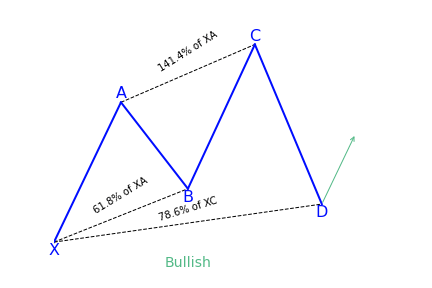 The cypher is a technical wave pattern in which the market is trending but it makes sharp reversals during the day. The important point of the bullish cypher is that both the lows and the highs are trending upwards. For the bearish pattern, the opposite happens.

If the cypher completes successfully with a reversal taking place at point D, it may eventually become a trend channel where the price moves between the highs and lows. Cyphers can also appear inside price channels that are already formed.

How to trade when you see the Cypher pattern?

Now that you know how to identify and qualify the harmonic cypher pattern, it’s time to trade the pattern. Standard methods of trading the cypher pattern include:

Next, buy with a market order at the first candle preceding the completion of the D point at 0.786 Fibonacci retracement of the XC leg. Once the market touches the 0.786 level, wave D is in place, because you can’t control how far the market will go.

There are some ways to take profit with this pattern, but the standard method is to scale out of your position at the first take profit level and end the trade at the second take profit level. Take profit once you get to point A. To get to such levels, draw a Fibonacci retracement of the CD leg.

Ensure you take profits once you reach point A of the pattern, because it has conservative take profit target.

So, why should you take profit so early?