What is the Bat harmonic pattern?

The Bat harmonic pattern is close to the Gartley pattern. It is a retracement and continuation pattern that comes up when a trend temporarily changes its direction but then continues on its original course. The pattern is a 5-point retracement structure that was discovered in 2001 by Scott Carney. It has particular Fibonacci measurements for every point within its structure. It is necessary to note that D is not a point, but rather a zone in which price is probably going to reverse. This zone is known as the Potential Reversal Zone (PRZ).

The first target might be the 382 retracements of AD and the second target the 618 retracements of AD. A popular stop-loss level would be behind the X-point. Conservative traders may wait to get additional confirmation before trading. Bat patterns can be bearish and bullish.

How to identify the Bat harmonic pattern with Fibonacci

The bat harmonic pattern follows different Fibonacci ratios. One of the major ways to differentiate it from a Cypher pattern is the B point which, if it doesn’t go above the 50 percent Fibonacci retracement of the XA leg then it is a bat, otherwise it can turn into a cypher structure.

The Bat pattern is a 4 legged pattern

As mentioned earlier, the bat harmonic pattern looks very similar to the Gartley pattern. It has four different legs marked as X-A, A-B, B-C, and C-D.

However, with the bat pattern, traders look to place their entry trade order at the location where the C-D leg has reached an 88.6 percent retracement of the X-A leg. Ideally, point D should also represent a 161.8 to 261.8 percent extension of the B-C leg. 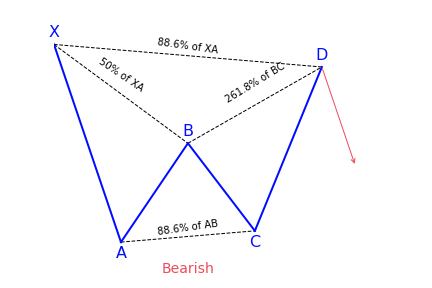 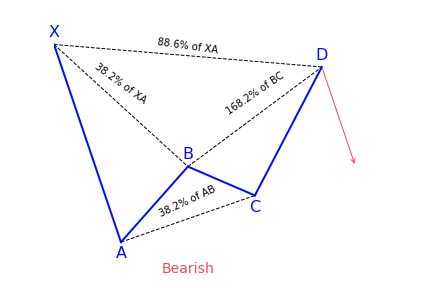 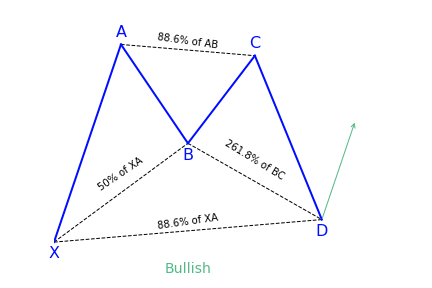 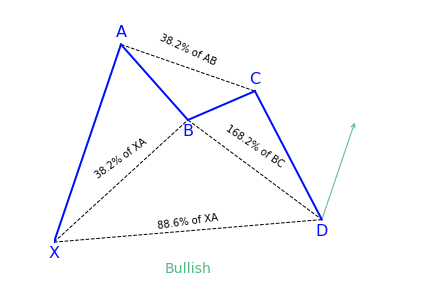 What does the Bat pattern tell traders?

It offers traders the opportunity to enter the market at a good price, just as the pattern completes and the trend resumes. The main difference of the bat pattern to the Gartley pattern is where it completes – at an 88.6 percent Fibonacci retracement of the X-A leg. Its inner retracements are also slightly different.

The harmonic bat pattern teaches traders how to trade the bat pattern and begin earning money with a new exciting approach to technical analysis. The market strategy of the pattern is part of the harmonic trading patterns system of trading. Just as it is with many harmonic patterns, there is a bullish and a bearish version of the bat pattern.

How to trade when you see the Bat pattern?

Before trying and trading the pattern, confirm from this checklist that the pattern is real. It should include these vital elements:

Next will be to look at how traders can trade using the bat pattern. We will make use of the bullish bat pattern as an example. For a bearish bat pattern, simply do the opposite for your orders.

The first thing to look for when looking for this pattern is the impulsive leg or the XA leg. We are trying to identify a strong move up or down depending if we either have a bullish bat or a bearish bat pattern.

The next thing traders should do is to look for a retracement of the AB leg up to at least 38.2 percent Fibonacci ratios, but it cannot exceed the 88.6 percent, and this will form the third point C of the pattern strategy.

The last thing to do is to establish is the D point, and to get to the D point, find the 0.886 Fibonacci ratios of the impulsive XA leg, which will lead to a deep CD leg, and finally, it will complete the entire structure of the pattern.

Market strategy with the Bat pattern

The market strategy of the pattern has been tested across various classes of assets (commodities, currencies, stocks, and cryptocurrencies). It is recommended that traders should take the time and back-test the bat harmonic patterns strategy before using this advanced pattern for trading.

It is recommended that traders should enter as soon as they touch the 88.6 percent figure. Oftentimes the harmonic bat pattern strategy doesn’t go much above this level.

Usually, traders should place their protective stop-loss lower than the point X of a harmonic bat pattern. That is the only logical location to hide the stop-loss because any break below will automatically invalidate the pattern.

There can be several ways to manage your trades, but the best target for this pattern should be to use a multiple take profit formula. For this pattern strategy, take the first partial profit once you hit wave-C level and the remaining half once we break above wave-A.

By doing this you will accomplish two things: