What is the Crab harmonic pattern?

Beginning with the swing low or high, every leg is marked by a letter. There are five swing points named as X, A, B, C and D. In some patterns, you will only find four (X, A, B and C).

The crab pattern is different because of its sharp movement in the CD leg. This is usually a 1.618 percent Fibonacci retracement of the XA leg, the previous part of the crab pattern.

Some rules that have to be followed to confirm a crab pattern, such as:

When a Crab harmonic pattern is confirmed

After the crab pattern confirms these factors, a position can be taken after the CD leg is made. Even though you will not notice the CD leg is always reversing close to 161.8 percent, if price action starts to stall and such a reversal begins to happen, it can be a high probability trade setup.

It is always better to wait until point D is made and then take an appropriate short or long position. Stop-losses are placed at the low or the high of D, and targets are typically points A or B in the pattern. 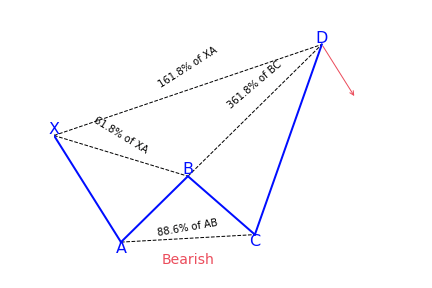 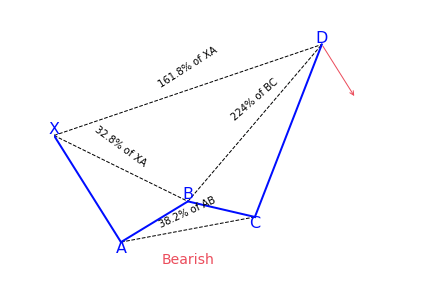 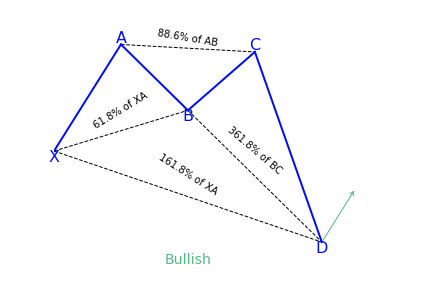 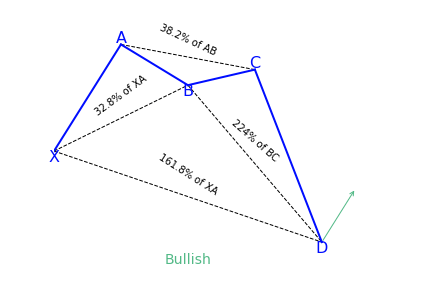 How to identify the Crab pattern?

Aside from the main rules of the crab pattern, traders can look for the following signs in the market, by analyzing the lows and highs and simply observing the price movement.

What does the Crab harmonic pattern tell traders?

Just like the butterfly, it can help traders identify when a current price move is likely getting to its end. This means traders can enter the market just as the price changes direction in the opposite way.

To trade a bearish crab pattern, put a short (sell) order at point D (the 161.8 percent Fibonacci extension of the XA leg).

When the price action confirms the pattern, immediately enter for a buy. If you are a conservative trader, ensure you wait for a couple of bullish confirmation candles before entering the trade.

There are four targets (X, B, C, A) to place the take-profit order in the crab pattern. At the start, traders try to book full profit at point A, but when the price crosses point B, the market turns sideways. So book half of your profit at point B and then close your full positions at point A.

Most of the traders placing their stop-loss way below point D; however, that’s a wrong way to do it because they are risking more due to this simple logic. If the price action breaks point D, it automatically invalidates the pattern.

But when you consider the crab pattern, the swing point D ends at the 161.8 percent extension of the XA leg and terminates the AB leg between 38.2 percent and 61.8 percent. These two major differences in the Fibonacci ratios between the crab pattern and the butterfly pattern make them unique from each other.