What is the AB=CD (ABCD) harmonic pattern?

The AB=CD pattern is considered the simplest harmonic pattern because it has significantly less requirements than most of the other harmonic setups. In addition to that, the AB=CD formation is much easier to detect on the price chart.

After weeks of research, back testing and live trading, experts feel comfortable to recommend this setup to traders.

There are two types of AB=CD (ABCD) patterns

There are two types of AB=CD trading patterns – the bullish AB=CD and the bearish AB=CD. 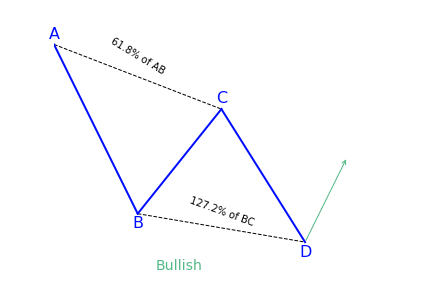 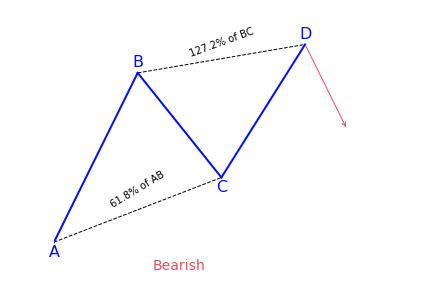 How does Fibonacci Ratios integrate with the pattern?

This pattern needs to conform to particular Fibonacci ratios. Usually, there are two Fibonacci rules associated with the ABCD figure:

When trading the ABCD pattern, always conform to the Fibonacci levels. There are various indicators to assist you in confirming the patter requirements.

What does the AB=CD (ABCD) trading pattern tell traders?

Usually, the price action behavior of the ABCD pattern begins with the price going in a new direction A, which later creates a swing level B, then retraces a portion at C, and finally resumes to take out the important swing at the second position. It continues until it gets to a distance equivalent to AB or D. When the CD portion gets to an equivalent distance to AB, it is expected that there will be a reversal of the CD price move. At the same time, BC and CD will respond to particular Fibonacci levels.

When there’s a confirmation of AB=CD pattern, traders look to set entry points on the chart at the beginning of the emerging reversal after the CD move. The idea is to enter the market early enough with a trading position just after the reversal of the CD move.

How to trade the AB=CD (ABCD) harmonic trading pattern?

Trading the ABCD pattern involves rules meant to guide people on how to enter trade, lock potential profits and exit with minimum loss if the market follows the opposite direction. The entry of a trade, whether buy or sell, triggers when the pattern is in place.

After the AB=CD harmonic pattern has been identified, you can start looking for a trading opportunity at point D. The buy and sell signals are generated after the final C to D leg, when a reversal is expected to occur. If the pattern is trending higher, traders can look to sell or enter a short position at point D. If the pattern is trending lower, it is advisable to buy the security at point D in anticipation of a turnaround.

It is best to place stop-loss points just above or below point D, depending on the direction of the trade. If the move goes beyond that point, the chart pattern is invalidated and the reversal is less likely to happen. Take-profit points are placed by using the Fibonacci levels. For instance, traders might look for a move back to the original point A and move a trailing stop-loss to 28.2, 50, and 61.8 percent Fibonacci levels along the way.

Study the chart looking at the highs and lows of the price. Observe the price as it forms AB and BC. For a bullish ABCD pattern, C has to be lower than A and should be the intermediate high after the low at B. Point D has to be a new low below B.

When the market gets to a point where D may be found, don’t rush into a trade. Make use of some techniques to ensure that the price reversed up, or down for a bearish ABCD. The best scenario is a reversal candlestick pattern. You can set a buy order at or over the high of the candle at point D.

Setting a profit target for your trade

One way of deciding where to take profits is by drawing a new Fibonacci retracement point from A to D of the pattern. If you are not sure the point to place your profit, set it at the 61.8 percent level, but closely observe how the price reacts around the levels. If the price finds it difficult to break through any of them, close your trade and take an early profit.

The AB=CD pattern is one of the most popular harmonic patterns. Since it often appears in practice, traders can use it together with other kinds of technical analysis to improve their chances of success. The secret is matching up Fibonacci levels and setting the right stop-loss and take-profits points to manage the trade. Since their appearance in 1935, harmonic patterns have gained momentum lately and have gone through several refinements. The addition of Fibonacci ratios and projections has given the specifications more detail.