What is the Shark harmonic pattern?

The shark harmonic pattern shares some of the most unique conditions that can be found on some of the extreme patterns. For instance, both the shark pattern and the 5-0 are not typical M-shaped or W-shaped patterns. The shark pattern comes up before the 5-0 pattern. It also has a particular and specific Fibonacci level that the deep crab shares.

One character that might seem abnormal to all other harmonic patterns is that the reaction to the completion of this pattern is short-lived. This is one of the most useful harmonic setups in the entire work of the creator of the pattern, especially for intraday traders, and this pattern is very much for active traders.

This pattern is similar to the bat pattern, except for the C point going beyond the BC leg. It can point to a good counter-trend move. The potential reversal zone (PRZ) is defined by these harmonic levels: the 88.6 percent retracement of the initial leg and the 1.13 reciprocal ratio of the previous leg. Targets can be various retracements of the CD leg, all the way up to C leg. There are various means of determining where the stop should go. Some put it above the next structure level after the D point, others select the 1.41 extension of XA.

The Shark pattern frames a trade

Conservative traders look to find more confirmation before going into a trade. It can be based on the value of an indicator, a particular bar pointing at a reversal or confluence with other processes. The shark pattern can be either bearish or bullish. It is as effective as other harmonic patterns and a common variation on trading the pattern is to trade the last leg to completion.

A bearish shark mostly shows entry and exit points. Most real-time samples will not have very accurate ratios between OXABC. Another interesting aspect of the shark pattern is its volatility, which makes it look like the crab pattern. In a bearish state, shark patterns mostly have a long series of candle bodies and long spikes, created very close to the PRZ level of C. On the other hand, a bullish shark pattern shows the volatility created close the PRZ zone of D.

How to identify the Shark pattern?

The structure of a shark pattern has an impulse leg (X-A) and a retracement leg (B). In this case, the retracement has no particular value. The continuation leg (C) has to get to a Fibonacci extension of 113 percent of the B-A leg, but shouldn’t go beyond the 161.8 percent mark, a retracement for X-C follows afterward.

The shark pattern so obtained has to get to an extension of 88.6 percent of this retracement, but should not be more than 113 percent. The next Fibonacci extension will be B-C, which is an extension of the A-X leg, within the 161.8 to 224 percent range. But as far as entering a trade goes, it is different from other harmonic patterns, for example:

The main factor that differentiates between the harmonic shark and other patterns is that it depends on the 88.6 percent and the 113 percent reciprocal ratios. Once the price point at D is created, prices decline or rally very quickly. Therefore it needs active management of the trade. In other words, you simply cannot set up the harmonic shark pattern and come back a while later to trade it. By that time price would have gone a major distance. 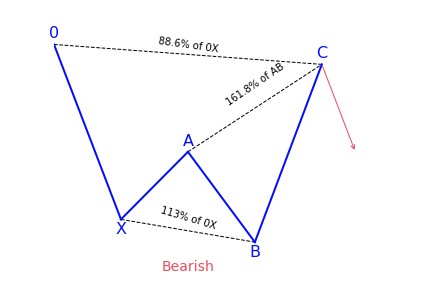 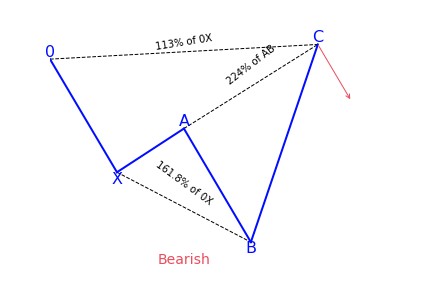 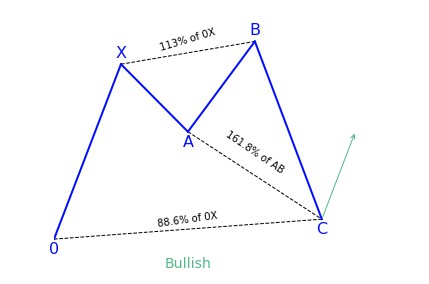 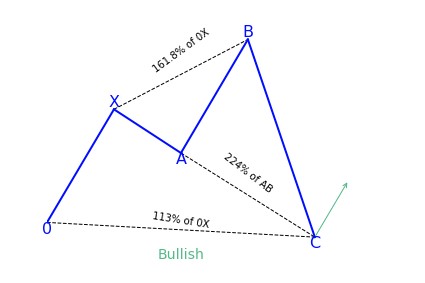 What does the Shark pattern tell traders?

Just like any other harmonic pattern, the shark trading strategy is a five-leg reversal pattern. It follows particular Fibonacci ratios.

The pattern differentiates itself from the other harmonic patterns by its five points setup being labeled as O, X, A, B, C. Additionally, the termination point of leg B ends above wave X. It goes beyond a minimum of 1.13 and a maximum of 1.618 Fibonacci ratios.

A real shark pattern should fulfill these three Fibonacci rules:

The shark harmonic pattern is within the 5-0 pattern structure. The structure means that, unlike the other harmonic patterns, all trades have to be taken based on point C. While the point D is used as a pre-defined profit target. Generally, the completion point of the CD swing-leg ends at 50 percent Fibonacci retracement of BC leg. It has to also satisfy the AB=CD condition.

This is the most common way the pattern is traded by attempting to grab the final move of a complex pattern entering at C. It also has a protective stop loss above or below the 2.24 of AB retracement and targeting the 50 percent retracement of the BC swing-leg.

How to trade when you see the Shark pattern?

The ideal method used to trade a shark pattern is quite different from that used for other chart patterns. The take profit can be at 50 to 61.8 percent of BC.

The way to trade this pattern is to go in at the open of the next candlestick after the harmonic indicator has detected the pattern. As soon as the C-leg forms, enter the market with a protective stop-loss at the 2.618 extensions of AB swing-leg.

Charting and drawing the Shark pattern

Traders need to have 4 points or 4 swings high/low points that join together to form the harmonic crab pattern strategy. Each swing leg has to be validated and stick to the Fibonacci ratios of the shark pattern forex.

Stop-loss on the Shark pattern

The stop-loss can be placed below the 1.150 Fibonacci extensions of XA at point C. As the market begins to go towards the first take profit, move it after D leg. This is the best place to hide the stop-loss because any break below will automatically invalidate the Fibonacci requirements for a shark pattern.

Just as it is with any new pattern, you need to be cautious when trading this pattern. You should only trade the best price structure that fits into all the Fibonacci ratios with great precision. Be picky! The shark harmonic trading strategy works very well as a strong counter-trend strategy.